SW Trails has been successful in getting things done: either by direct volunteer action or by working with the Portland city government to move forward on trails projects. Click on any of the points in the map below for details about the various projects completed by our volunteers:

SW Trails has had an impact on the neighborhood. For example, one family chose a house because of SW Trails.

An out of control vehicle destroyed what neighbors refer to as “Little Bridge” at the entrance to Woods Park. This important short trail connection is much used by residents of Ashcreek and Crestwood neighborhoods. As a result Friends of Woods park funded and helped build a replacement bridge with assistance from SW Trails and Ashcreek and Crestwood NET teams.

Lots of hard work went into replacing little bridge and 20 days after destruction, on April 22nd the replacement bridge is in place, slightly larger, much stronger, and further from the road. A big thanks to all those who participated in restoring this path and safe off road access to Woods Park. 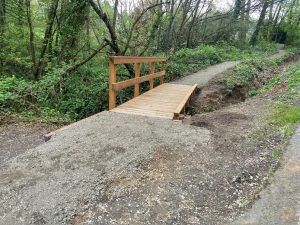 Bridlemile neighbors and SW Trails volunteers finished the walkway –part of SW Trails #1—turning “the fifty-year-old muddy, rutted, weed-choked bumpy, pot-holed path that connects SW Julia Ct to Shattuck Rd into a clean, raised, smooth, hard surface built in compliance with Portland Parks & Recreation Trail Design Guidelines.”(SW News) The project took 22 volunteers, under the guidance of veteran SW Trails builders, four weeks to create the wood ramps and raised turnpike that will make walking for everyone, including those with altered mobility and mobility devices, much easier. This part of Trail #1 connects residential areas with a commercial area, a school and a park. The project was funded by PBOT’s Portland in the Streets Community Grant program and was sponsored by SW Neighborhoods and the Bridlemile Neighborhood Association. 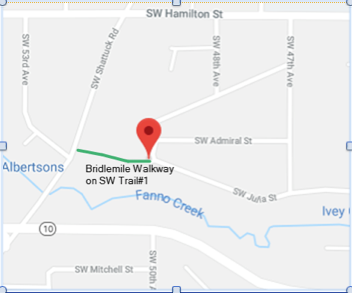 47 new box steps set in gravel negotiate a 40-foot rise and complete the new Seymour Court trail. This relatively short but very important 130-foot-trail connects the Willamette Greenway trail and the South Portland neighborhood to Barbur and Terwilliger Boulevards, thus the Homestead and Hillsdale neighborhoods, via the Corbett Street bridge over I-5. This new set of steps and trail replaces a steep and muddy informal pathway leading to the southeast end of the Corbett bridge (which has a sidewalk). It’s a spiffy new route between Macadam and Barbur in an area in need of more pedestrian connections across I-5, and was conceived of by the residents of SW Seymour Court, who also helped with design and implementation of the trail—with lots of technical and construction assistance of SW Trails volunteers.

Funding for the project came from a grant from SW Neighborhoods Inc (SWNI), and is a partnership between the South Portland Neighborhood Association and SW Trails. 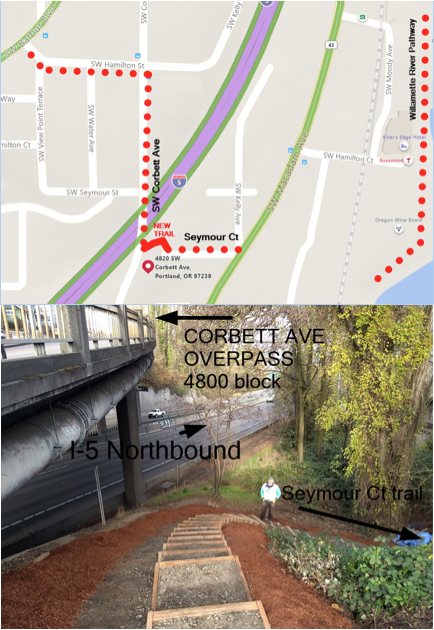 SWTrails volunteers and neighbors distributed nearly 12 cubic yards of gravel, pulled weeds and widened the trail along the east side of Capitol Highway, between Taylors Ferry Road and Garden Home Road, making a wider, safer walkway to replace the muddy and narrow path. The gravel came from the Portland Bureau of Transportation’s Fixing Our Streets program; SWTrails and neighbors provided shovels, wheelbarrows and hard work.

Larger projects which often took years of effort to bring about: 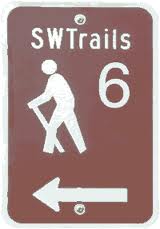 These 90 steps traverse a steep ravine connecting the lighted crossing at Beaverton Hillsdale Highway–SW 25th (the street up to Robert Gray Middle School) and SW Bertha St. After years of lobbying, fundraising, preparation and 325 hours of volunteer work by SW Trails Advocate Don Baack, volunteers for SW Trails, neighbors and trail users, the Bertha Steps were finished in February of 2018 (final cost: $22,000). The Bertha trail (coming down from the SW 25th Trail, a project SW Trails is also sponsoring) has been designated one of Portland’s Safe Routes to School, as it allows children attending Robert Gray to walk safely to and from school from neighborhoods across Beaverton Hillsdale Highway, including the Stephens Creek Crossing housing complex, without having to go significantly out of their way, along dangerously high-traffic road shoulders or on muddy, difficult trails. These beautifully-built new steps also let congregants at the Neveh Shalom synagogue, the Portland Christian Center and the Japanese Fellowship Church walk to these buildings more easily, and offer neighbors walking their dogs to the Hillsdale Park off-leash area or just taking a hike to Hillsdale a quicker and safer route. 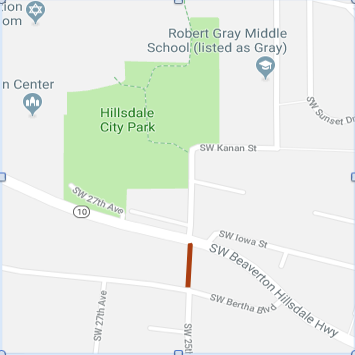 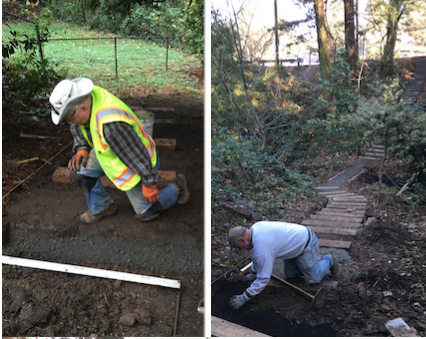 A most spectacular journey through SW Portland on the 4 T’s: Trail, Tram, Trolley and Train.

A path, stairs, and boardwalk across the Stephens Creek natural area.

SW trails lobbied the state legislature to change the law: Portland land owners are now immune from liability for injuries to pedestrians on trails adjacent to their property.  So are nonprofit volunteer organizations like SW Trails who build the trails.

SW Trails over the years.

The following is a partial list of projects that have been accomplished by SW Trails. We became a 501 (c) 3 nonprofit organization in 2013.

Do NOT follow this link or you will be banned from the site!